Bus station is a long way from the hotel. Rain stops three times during the ride and starts again.
Taxi costs half the price of Mandalay bus ticket. The bus station is a whole block.
I have a ticket to VIP bus. It was supposed to be better than ordinary bus. It is. Three seats in a row, one on the one side of the aisle and two on the other side. I have the single seat but since there’s only one passenger per row so it does not matter actually. Hello Kitty blankets. The stewardess starts to distribute things right away. Cake are two pieces of something in a box, both wrapped separately in plastic. Why. Candy. Carbonized soft drink, liquid sugar, a very warm can. Better not to open. Finally she asks everyone if anybody wants medicine, swinging a large box. Interesting, what are the options? The announcement is for me also in English but I don’t understand it any better than the previous Bamar language one. That we’ll arrive at six. And this I knew before.
I see a bus with ‘Academia Highway Express’ written on it. Perhaps I ought to be on it.
I have been farsighted enough to take warm clothes and socks to protect me from wind in the bus. I’ve also put toothpaste and brush in an easily reachable place. Because on midnight we stop somewhere with a lot of buses and flashing lights where all the people from our bus walk in single file through eating people to the toilet. This has already been. Where are all the tourists?
We are in Mandalay half an hour before the announced time. After getting through a group of yelling men a intelligent-looking man comes to ask if he can help me. He can take me on his motorbike to the hotel with half the price of a taxi. Well then. He’s happy that I’m Estonian. Otherwise there are mostly French and Germans. Perhaps they collect nationalities here? He says that I must really like Burma after hearing that I’m third time there. I try to say yes convincingly. Only yesterday I found a new study that shows that the problem has one more layer and this is not pretty.
In the hotel I have enough time to shower, do my exercises and sleep for an hour before meeting my local contact. We arrive in the lobby at the same time. He also has a friend with him, a linguist. First we have breakfast and then they have organized meetings with four people. That’s shows Burmese efficiency in a different light. The most interesting discussion I have with a university professor although everybody speak so disapprovingly of the universities. Maybe they have never been to one.
Mandalay is nicer and lower than Yangon. But the same unreasonable temperature. My room is a concrete box. Good and big but without mobile network. Which is annoying. My Yangon contact keeps me on hold. Which is even more annoying. 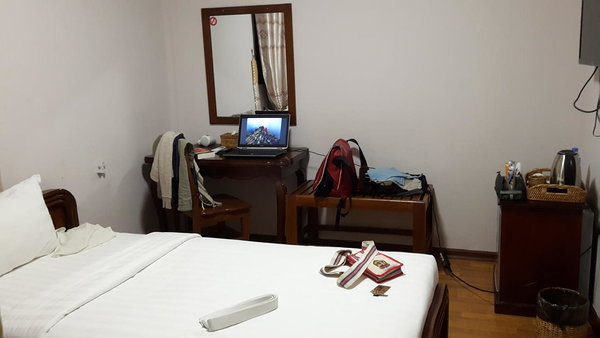 Previous
moving on
Next
days full of emptiness